Howdy, Bookish readers! Today, we've got an author from a special state. Why is it so special? Because she lives in the same wonderful state that I do! Wisconsin. :D But you don't want to listen to me talk about Wisconsin. I'm sure you'd prefer to let Peggy talk about her book. So I'll stop jabbering to you.

Have you ever had to sacrifice something to bring back something or someone you love? Peggy McAloon is here today to talk about the second book in her Lessons from Fiori series, Missing. Elle's brother has been kidnapped. Will she be able to save him?

Elle's desperate to find her kidnapped brother. She teams up with the winged warriors from the dimension of Fiori to save him, but JJ isn't the only one in danger. What will Elle sacrifice to bring her brother home? Can she fulfill the ancient prophecy and restore the magic of the Bronze Pendant?
You will love this Coming of Age, action-packed fantasy for middle-grade readers. Elle Burton's goal is to rescue her brother. What she discovers is pure evil. The author provides a female role model who strives to overcome her flaws and inspire kids everywhere.
"Missing" blends the magic of a fairytale with the contemporary realities of the world today's youth inhabit. You will discover a new world order through the journey of a young girl who exhibits both compassion and jaw-dropping courage in her quest to fulfill an ancient prophecy. Find yourself caught in the ultimate struggle between good and evil. "Missing" is the second book in the "Lessons from Fiori" series. 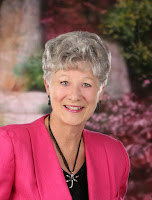 Peggy M McAloon is on a mission to inspire kids everywhere to stand up to abuse and bullying. Her “Lessons from Fiori Series” about a young girl from Wisconsin, provides a strong female role model who isn’t afraid to show compassion or hack into a con man’s computer if the need arises. Peggy’s courageous battle with depression, abuse, and a traumatic brain injury has enabled her to identify with both children and adults who have suffered from abuse and bullying.

She’s a retired trainer and speaker in the field of commercial credit. Her first book, “The Art of Business Credit Investigation” was featured in Inc. Magazine. She’s been interviewed by the Associated Press and appeared on news shows in her efforts to protect our water resources. 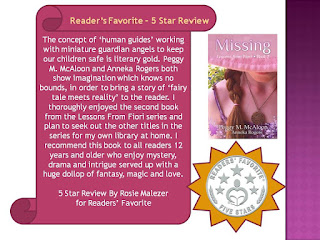 The first book in the series, Elle Burton and the Reflective Portals has been reduced by Amazon. The softcover is at 56% off, or $6.11 for the 276-page book. Double check the price before purchasing, though, since Amazon can change the price at any time. Missing is also free on Kindle Unlimited.

August 13
Bookish Orchestrations-Giveaway Winner
Posted by Faith Blum at 12:00 AM