After duty as an ambulance driver in World War I, Ellie Morgan returns to Chicago to take up her share of the work in her grandparents’ department store. Ellie doesn’t want to alienate her family or disappoint them, but despite a six year effort to settle in, she feels increasingly trapped in store routine. Meanwhile, her grandmother urges her to marry a local politician and help him succeed in his chosen field. Ellie’s grandfather, however, wants to see her happy and independent. “Go West, young woman, go west,” he advises paraphrasing a popular quotation of the day. So with Granddad’s help, Ellie secures a job on a ranch in Colorado and sets out to prove that she has the necessary character to succeed at a third vocation.

When Aldon Leitzinger meets Ellie’s train in Clifton Colorado, he introduces himself as the foreman of the ranch. But the more people Ellie meets in the community, the more apparent it becomes that she is in demand to fill a number of roles for which she is not prepared. Desperate to prove herself, she settles in to please everyone, a task that puts her at risk of failure in every attempt at finding a new and happier life.

DiVoran has been writing for most of her life. Her first attempt at a story was when she was seven years old and her mother got a new typewriter. DiVoran got to use it and when her dad saw her writing he asked what she was writing about. DiVoran answered that she was writing the story of her life. Her dad’s only comment was, “Well, it’s going to be a very short story.” After most of a lifetime of writing and helping other writers, DiVoran finally launched her own dream which was to write a novel of her own. She now has her Florida Springs trilogy and her novel, a Christian Western Romance, Go West available on Amazon. When speaking about her road to publication, she gives thanks to the Lord for all the people who helped her grow and learn.  She says, “I could never have done it by myself, but when I got going everything fell beautifully into place, and I was glad I had started on my dream.” 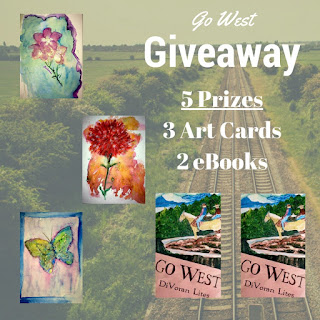 DiVoran has five prizes for five people! First to go will be the beautiful art cards and then we’ll have the two eBooks. Enter below:
a Rafflecopter giveaway


Ellie heard the upstairs window slide open. Cathy barely had to raise her voice to be heard. “Take the stick and fish the diapers out of that big galvanized tub where they’re soaking and throw them in the pot hanging from the tripod. I already put in the soap flakes. Stir them around then take them back out so you can rise them in that other tub. That’s cold water, so you can wring them out before you hang them on the line.

By the time Ellie finished the difficult chore she almost wished she hadn’t offered to help. She sat down on a rock and rested her back against the rough bark of a tree. When she woke she was being gently shaken…