The Dragons of Alsace Farm

Everyone has their secrets and Tayte, Agnes, and Noah are no exception. In Agnes’s home, though, those secrets—or dragons—might just tear them all apart. Part of the Kindle Scout competition, The Dragons of Alsace Farm, was hot and trending for four weeks before its launch. Find out why during this blog tour! 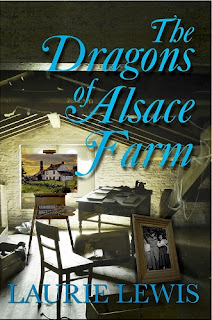 In need of his own redemption, Noah Carter finally confronts his childhood hero, the once-beloved uncle who betrayed him. Instead of vengeance, he offers forgiveness, also granting Uncle John a most curious request—for Noah to work on the ramshackle farm of Agnes Deveraux Keller, a French WWII survivor with dementia.

Despite all Agnes has lost, she still has much to teach Noah. But the pair’s unique friendship is threatened when Tayte, Agnes’s estranged granddaughter, arrives to claim a woman whose circumstances and abilities are far different from those of the grandmother she once knew.

Items hidden in Agnes’s attic raise painful questions about Tayte’s dead parents, steeling Tayte’s determination to save Agnes, even if it requires her to betray the very woman she came to save, and the secret her proud grandmother has guarded for seventy years.

The issue strains the fragile trust between Tayte and Noah, who now realizes Tayte is fighting her own secrets, her own dragons. Weighed down by past guilt and failures, he feels ill-equipped to help either woman, until he remembers Agnes’s lessons about courage and love. In order to save Agnes, the student must now become the teacher, helping Tayte heal—for Agnes’s sake, and for his.

We've had a lot of posts from excerpts to reviews to interviews. Not to mention the fun giveaway basket Laurel put together. And now to find out who won! While we wait for rafflecopter to generate the winner, here is a summary of the posts we had:

And now to find out who won the giveaway!

Congratulations! Laurel will be in touch with you soon and get the gift basket to you.

Thank you all for participating in the blog tour. I appreciate it! 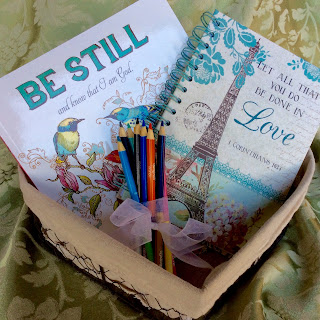 Posted by Faith Blum at 4:30 AM No comments:

I've always liked twins. I don't know why. But doesn't almost everyone wish they had a twin? Imagine what it would be like to have someone so close to you. I suppose that's probably one reason I wanted to write this story. What would happen if twins decided to go West as mail order brides? If you've followed my books at all recently, you'll know this one has a twist to it. Just As I Am is the second of three novellas about young ladies who's plans were changed suddenly. What will Eve and Evangeline do about it now?

Just as I am, without one plea
But that Thy blood was shed for me
And that Thou bidst me come to Thee
O Lamb of God, I come, I come.


Eve and Evangeline Collins are adventurous twins who decide to take a risk and head west as mail order brides. Their parents are less than pleased, but do nothing to stop them. Eve and Eva don’t realize their danger until they stop just outside Cheyenne. Will they ever see their family again?

Imagine with me a city. You’re almost there. It’s a city you’ve always wanted to go to. The [enter your favorite mode of transportation] is creeping ever closer. Then it stops. Almost there, but not quite. Laurel Garver is with us today to talk about her book, Almost There. Let’s see how many times we can use the title in different contexts.

Paris, the City of Lights. To seventeen-year-old Dani Deane, it’s the Promised Land. There, her widowed mother’s depression will vanish and she will no longer fear losing her only parent, her arty New York life, or her devoted boyfriend.

But shortly before their Paris getaway, Dani’s tyrannical grandfather falls ill, pulling them to rural Pennsylvania to deal with his hoarder horror of a house. Among the piles, Dani finds disturbing truths that could make Mum completely unravel. Desperate to protect her from pain and escape to Paris, Dani hatches a plan with the flirtatious neighbor boy that only threatens the relationships she most wants to save.

Why would God block all paths to Paris? Could real hope for healing be as close as a box tucked in the rafters?

Alicia Ruggieri comes for a visit

A Love to Come Home To
Book 3 in the A Time of Grace Trilogy
By Alicia G. Ruggieri
Releases: July 22, 2016 in softcover and on Kindle
Purchase: http://bit.ly/1XVezoM

Hardened Ben Picoletti thought he’d turned his back on Depression-era Rhode Island years ago. Nothing remains there for him, except for haunting memories of an abusive childhood. Yet when a criminal accusation shatters his ambitions, Ben has nowhere to flee but back to his stepfather’s home.
There, he finds that redemption yet waits for him… but the sacrifice required to attain it may exceed the limits of his family’s hearts.
Meanwhile, his musical sister Grace continues her studies in New York. She longs to hear a word of affection from her high-school beau… yet only Paulie’s silence greets her. Grace must decide whether she wants to live in the past or move into an unknown future with unexpected love.
Lyrical and sensitive to the aching heart, A Love to Come Home To affirms that God delights in being a stronghold in times of trouble; that He renews His mercy every morning; and that He will work every bitter thing together for the good of His children.

Have you ever read a story and wondered, "What happened to so-and-so?" Well that is exactly what happened after several readers finished Amanda Tero's Journey to Love. The journey is now continuing but this time in New York, with Marie's brother Edward. 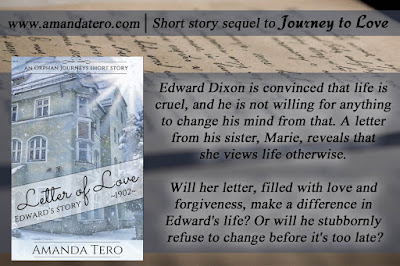 A short story sequel to the novella, Journey to Love. Can be read as a stand-alone.

I had the privilege of beta-reading this book and am excited to be part of the cover reveal. I must admit that this is a very different type of story than what I am used to, but I still enjoyed the story. And the cover is absolutely gorgeous! 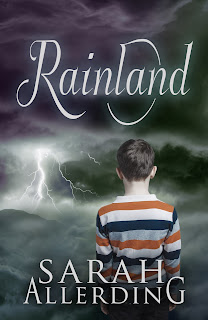 When Thomas gets caught in a summer storm, he is sucked into the world of raindrops through a tornado. He learns he will not be allowed to return until he can defeat the lightning, which has been hurling raindrops from the clouds. Many adventures await him in this strange land. Is everything just as the raindrops say it will be? Is it the lightning they need to defend themselves against, or is there a much greater foe behind the disturbing disappearances?

Today, I have the privilege of having Keely Brooke Keith on my blog with her new book cover! Be sure to read to the end of the post for information on the giveaway. 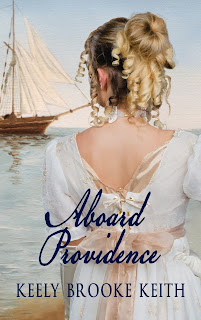 I love the cover, don't you? It's really pretty and it makes me curious about the boat and the girl. But now I want to know what the book is about.

One Sentence Summary:
A voyage aboard Providence changes Jonah’s plans, but can it change his heart?