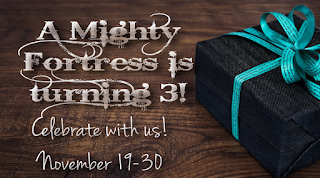 *does a happy dance* Today is the third birthday of my very first published book! To celebrate, I'm having a lot of fun going on. This afternoon, there is a Facebook Party. From today through November 30th (excluding Sundays and Thanksgiving), there will be multiple and various posts about my first book, my new book, my upcoming audiobook, a super fun giveaway, and much, much more. Check out the tour schedule at the end of the post and be sure to come to the Facebook party.

About My First Book 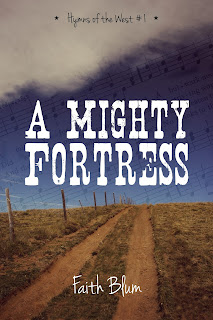 “Stay back!” Joshua ordered.  He kept his eyes on the scene below while waving his arm in Ruth's direction.  “Get deeper into the woods and stay down low to the ground.”
Joshua hazarded a glance behind him.  He could no longer see Ruth and breathed a sigh of relief.  In one swift move, he grabbed his rifle and lay flat to the ground.  Extending the rifle, he aimed at the shorter man whose gun was pointed at Bradshaw.

Joshua and Ruth Brookings are traveling by stagecoach to finally join their parents in Montana. Attacked by murderous outlaws, the teens barely escape with their lives and must survive in the barren Wyoming and Montana territories and escape the man who's hunting them.

Seven years ago, Jed Stuart ran away from home and joined Tom's gang. Jed is tired of the lawlessness and wants out. The only problem? He is the boss's right-hand man and will never be able to leave. And what's one more stagecoach robbery, anyway?

Can Joshua lean on God's strength to keep himself and his sister alive until they find a town?   Will Jed be able to face his anger or will it consume him completely? All three are running--the hunter and hunted. What will happen when they meet? 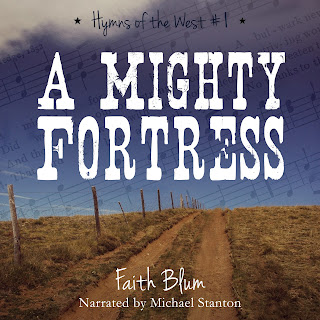 Faith is excited to announce that she partnered with Michael Stanton to produce an audiobook version of her book. We’re not sure exactly when it will be available, but if you sign up for her New Releases newsletter, you will get an email with the announcement.

Faith Blum started writing at an early age. She started even before she could read! She

even thought she could write better than Dr. Seuss. (The picture doesn’t show it well, but there are scribblings on the page of Green Eggs and Ham). Now that she has grown up a little more, she knows she will probably never reach the success of Dr. Seuss, but that doesn’t stop her from trying.
When she isn’t writing, Faith enjoys doing many right-brained activities such as reading, crafting, playing piano, and playing games with her family. One of her dreams is to visit Castle City, Montana, someday to see the ghost town she chose for her characters to live in. She currently lives on a hobby farm with her family in Wisconsin.
There are many ways to connect with Faith online. All of them can be found in one convenient place: http://FaithBlum.com. On her website you can find links to her various social media sites and both of her blogs. 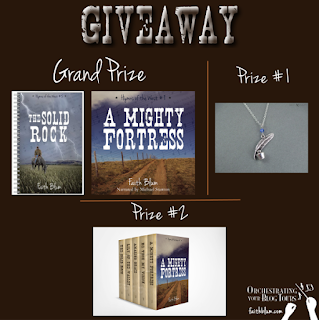 Hymns of the West, the Complete Series 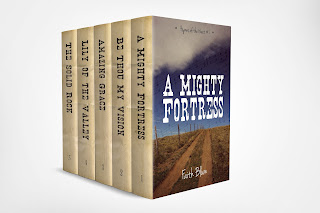 Two Families…
The Brookings family move from Illinois to Montana to start a horse ranch. Their journey to Montana has hazards of its own, as does their life in Castle City, affecting each of them in various ways.
The Stuarts have been living a secluded life in Tennessee since the matriarch of the family died. When Jed runs away, they seclude themselves even more until a letter arrives that changes their lives—one at a time—forever.

Two Worldviews…
One family has believes in God with their whole hearts, living out their lives to the glory of God. The other family believes in God in a general sense, but they have no commitment toward Him or His ways.

One Providential God.
A stagecoach robbery instigates their meeting. Two years later, they meet again. Another year and their lives cross paths again. What happens when God's providence brings two families with two different worldviews together in ways only He could have planned?

Every eBook in the Hymns of the West series is on sale. A Mighty Fortress is permafree, and the other eBooks in the series are $0.99. In addition, the spin-off novella series has a book on sale as well.

Links:
A Mighty Fortress
Be Thou My Vision
Amazing Grace
Lily of the Valley
The Solid Rock
Hymns of the West: The Complete Series

Life and Salvation: Hymns of the West Novellas 1-3

Faith also has the paperbacks on sale if you buy them from Createspace with the discount codes.